This pin is abourt cosmonaut Boris Yegorov.
Boris Borisovich Yegorov (1937-1994) was a Soviet physician cosmonaut who became the first physician to make a space flight.
Yegorov came from a medical background, with his father a prominent heart surgeon, and his mother an ophthalmologist. He also selected medicine as a career and graduated from the “First Moscow Medical Institute” in 1961. During the course of his studies, he came into contact with Yuri Gagarin’s training and became interested in space medicine.
Yegorov earned his doctorate in medicine, with his specialisation being in disorders of the sense of balance.
Yegorov was selected as a member of the multi disciplinary team that flew on Voskhod 1.  As a result of this space flight, Yegorov was awarded the title of the Hero of the Soviet Union on October 19, 1964.
He died from a heart attack in 1994. Voskhod 1 was the first multi men spaceflight. 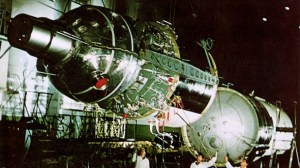