Price: 5.00 euro
For sale at http://www.propagandaworld.org

This pin is about Cosmonaut Feoktistov. This is his amazing story:
Konstantin Petrovich Feoktistov (1926-2009) was a Soviet cosmonaut and an eminent space engineer. Feoktistov also wrote several books on space technology and exploration. The Feoktistov crater on the far side of the Moon is named in his honor.
During the Nazi occupation, at the age of just 16, Feoktistov fought with the Soviet Army against the German troops, carrying out reconnaissance missions.
After being captured by a Waffen SS Army patrol, Feoktistov was shot by a German officer. However, the bullet went right through his chin and neck and did not kill him. Feoktistov was able to escape and then make his way to the Soviet lines.
In 1955, Feoktistov formed part of the team that went on to design the Sputnik satellites, the Vostok space capsule, the Voskhod space capsule, and the Soyuz space capsule.
In 1964 he was assigned to the Voskhod 1 crew. He was the first civilian to make a space flight, and the only cosmonaut in the Soviet Union who was not a member of the Communist Party of the Soviet Union. During his space flight, he spent just over 24 hours and 17 minutes in space.
In 1969, Konstantin Feoktistov and Georgi Beregovoi traveled as guests of NASA throughout the US, able to visit any city they chose Disneyland in California. They were joined on the trip by US astronauts  Eugene Cernan, Neil Armstrong and others.
If a band was present the song “Fly Me to the Moon” was played, then he joked with the US astronauts that they went to Disneyland and not the moon. It was a trip that all enjoyed and international friendships were made.
In 1990 he went to the Moscow Higher Technical School as a professor. He was highly decorated. 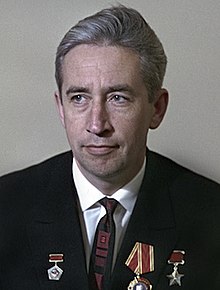 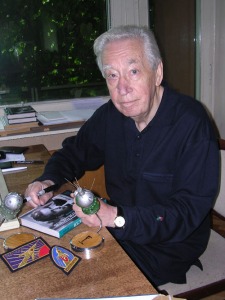