Matchbox label from Soviet Russia from late 50’s, early 60’s. The top of the label says:”On The Day Of Birth” right beneath that the name of the architect: Auguste de Montferrand”
The bottom of the label says:”Saint Isaac’s Cathedral”.
Saint Isaac’s Cathedral is a cathedral that currently functions as a museum in Saint Petersburg, Russia.
It is dedicated to Saint Isaac of Dalmatia, a patron saint of Peter the Great, who had been born on the feast day of that saint. It was originally built as a cathedral but was turned into a museum by the Soviet government in 1931 and has remained a museum ever since. The church on St Isaac’s Square was ordered by Tsar Alexander I in 1818 and took 40 years to build.
In 2017, the Governor of Saint Petersburg offered to transfer the cathedral back to the Russian Orthodox Church, but this was not accomplished due to the protests of St. Petersburg citizens opposing the offer. 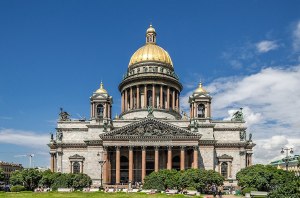