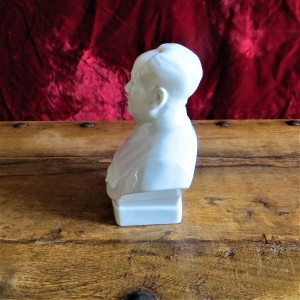 Porcelain Mao bust from China. In very good condition.
Mao Zedong (1893-1976) was leader of communist China for decades. He made major transformations in China, most known are the Cultural Revolution (removal of kapitalist elements) and The Great Leap Forward (the industrialization of China).
One of Moa’s most trusted man, Lin Biao, collected quotations of Mao and published them wich would become known as The Red Book. Lin Biao was a chinese general and politician who commanded the troops in the Korean war. Later he got into a power struggle with Mao and he died in a planecrash.