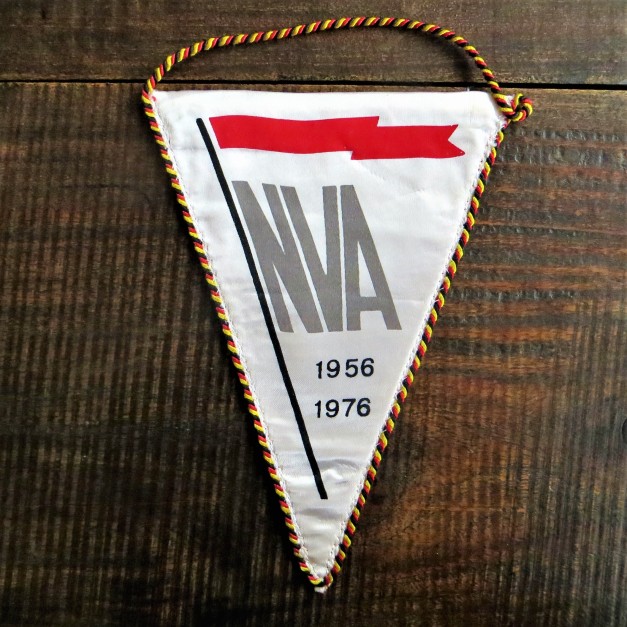 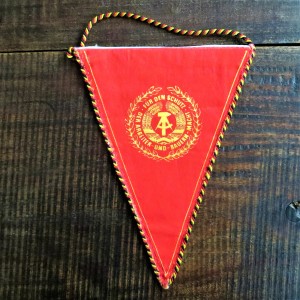 Cold war pennant from the DDR, national people’s army, 1976. Made for the 20th. anniversary of the NVA. The back of the pennant says:”For the protection that workers and farmers do”.
The National People’s Army (NVA) was the armed forces of the German Democratic Republic (GDR) from 1956 to 1990.
The NVA was formed in 1956 to succeed the Kasernierte Volkspolizei (Barracked People’s Police) and influenced by the Soviet Army, becoming one of the Warsaw Pact militaries opposing NATO during the Cold War. The majority of NATO officers rated the NVA the best military in the Warsaw Pact based on discipline, thoroughness of training, and the quality of officer leadership.
The NVA did not see significant combat but participated in the Warsaw Pact invasion of Czechoslovakia in 1968, deployed military advisors to communist governments in other countries, and manned the Berlin Wall where they were responsible for numerous deaths. The NVA was dissolved in 1990 and its facilities and equipment were handed over to the Bundeswehr (the armed forces of West Germany), which also absorbed most of its personnel below the rank of non-commissioned officer.