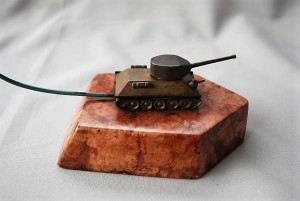 Soviet Tank with Fighter Jet. 2 icons from the Soviet Union era. The T-34, the backbone of the army from the WWII and the Mig-15, the shock of every American pilot during the Korea war. “MiG Alley” was the name given by United Nations pilots to the northwestern part of North Korea, where the Yalu River flows into the Yellow Sea during the Korean War. The T-34 was a medium duty tank deployed by the Red Army during World War II. During the war, it was the most produced tank in the world.
It is an aluminum MIG-15 aircraft that is mounted with a steel bracket on a red marble base with a bronze/brass T-34 tank.
It is a beautiful combination that you rarely see, air force combined with army.
Dome of the tank can rotate 360 degrees and can be removed from the tank.