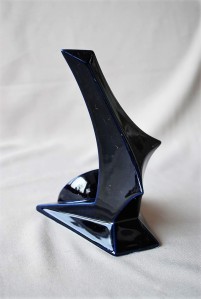 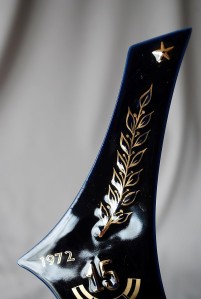 Warsaw Pact 4 countries Air defense. 1957-1972, 15 years of cooperation between Hungary, Russia, Czechoslovakia and Poland. Images of a MIG 21 with radar and ground to air missile. Laurel branch with the communist star at the top. Beautifully styled.
Dark blue porcelain with gold painted from the brand Hollohaza.
The Warsaw Pact was a military alliance of communist countries that existed between 1955 and 1991. It was established as a counterpart to NATO at the suggestion of Soviet party leader Nikita Khrushchev.
The treaty was signed on 14 May 1955 in the Polish capital, Warsaw, in response to NATO by the Soviet Union, Albania, Bulgaria, Romania, the GDR, Hungary, Poland and Czechoslovakia. All but one of the communist states in Eastern Europe were members: only Yugoslavia was left out. The members of the pact promised to defend each other if one or more members were attacked.