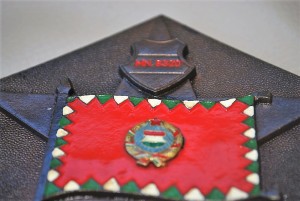 Plaque Hungarian People’s Army. Heavy bronze shield with star and the new socialist coat of arms that was in use from late 1957 to 1990. This weapon was called the Kadar emblem. Janos Kadar was the communist leader of Hungary who ruled over Hungary from 1956 untill his retirement in 1988. He ruled for 32 years and died in 1989.Shield was donated in 1978. The text on the shield reads:”Százhalombatta”. Could be the name of a person or the district in Hungary.