Posted by Iljin on 7 November 2020
Posted in: Clothes Hungary. Leave a comment

Hungarian Little Pioneers Second stage. The outfit is from 1980 and never worn, once hung in a store and stored after the fall of the Soviet Union until now!
Little Pioneers The movement’s second phase began when children from the early years moved from primary school to upper grades, at about the age of ten.
They then exchanged their blue uniforms for red and now had 12 points to live up to:
1. A pioneer is loyal to our homeland, to the Hungarian People’s Republic, and works responsibly for them
2. A pioneer strengthens the friendship between nations and maintains the dignity of the red scarf
3. A pioneer studies hard and increases his knowledge of the world and himself
4. A pioneer practices and maintains the values ​​of socialist society
5. A pioneer volunteers and helps his community
6. A pioneer behaves and speaks honestly
7. A pioneer loves and respects his parents, teachers, and elders
8. A pioneer is a loyal friend
9. A pioneer is courageous and disciplined
10. A pioneer loves and protects the environment
11. A pioneer exercises and takes care of his health
12. A pioneer lives in a way that does justice to the Hungarian Communist Youth Movement.

Posted by Iljin on 11 September 2020
Posted in: Clothes Hungary All. Tagged: Clothes, Hungary. Leave a comment

Posted by Iljin on 14 June 2020
Posted in: Clothes Yugoslavia All. Tagged: Clothes, Yugoslavia. Leave a comment 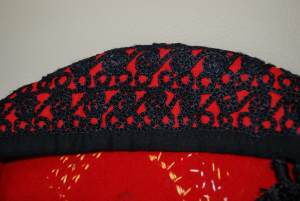 In 1945, the country became a communist federation, the Socialist Federal Republic of Yugoslavia. A new coat of arms was adopted in the style of socialist heraldry. At first the weapon showed five flames burning together, in a wreath of wheat.
Above the flames was the communist symbol of the red star. The ribbon that holds the wheat together is dated 29 November 1943, the day the AVNOJ met in Jajce and proclaimed the new communist federation.
The number of flames was increased from five to six in 1963. Originally, the five flames represented the Croats, Serbs, Slovenes, Macedonians and Montenegrins. Other nations, such as the Bosniaks / Muslims and Albanians, were not represented in the coat of arms. From 1963, the six flames represent the six Yugoslav states.
Cap is made of felt and embroidered.
On top is the coat of arms embroidered with the date 29-11-1943.