Junkers Ju 87 Stuka Bronze with bombs. Quite rare to find a stuka dive bomber actually with bombs. Made of bronze with patina. Propeller can turn and can also be removed from the model.

Handmade Gullwing Glider. Interesting model that requires more research. Is it a WW2 glider? Aircraft is made of polished aluminum and stands on a stone pedestal with an aluminum bracket. Aircraft can be removed from its bracket, it is also possible to turn the aircraft. Age-related scratches, dents and damage.

The Luftwaffe Junkers Ju-87 Stuka Tactical dive bomber. Made of brass, metal and marble. This handmade model stands on a red marble pedestal and can be detached from the base and bracket. Photo frame holder is also made of brass and has a tulip shape.

Handmade model of the German Junker Ju-88. The model is made in the Soviet Union in the 1960’s. The propellers and wheels can turn. Metal propellers are mounted on a brass shaft with brass nut.
The Ju-88 was a German Luftwaffe twin-engined fighter plane from World War II. Schnellbomber (fast bomber) that would be too fast for hunters of it’s time to intercept. One of the most versatile fighter planes of the war. Like a number of other Luftwaffe bombers, it served as a bomber, dive bomber, night fighter, torpedo bomber, reconnaissance plane, heavy fighter and at the end of the war as a flying bomb.

Model of the Junkers Ju 87 Stuka divebomber, made in the 1960’s. It was a German dive bomber and ground attack aircraft. Designed by Hermann Pohlmann, it first flew in 1935. The Ju 87 made its combat debut in 1937 with the Luftwaffe’s Condor Legion during the Spanish Civil War and served in World War II.
The wheels are strong allowing the plane to be taken off the stand. Propeller is made of metal and mounted on a brass shaft with brass nut. 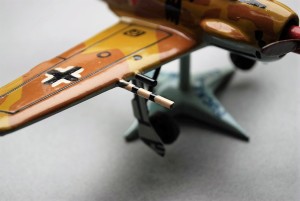 The Desert Fox. Cockpit can be opened. Made of zinc.
The FW-190 flew with Erprobungskommando in North Africa and is a German single-seat, single-engine fighter aircraft used during World War II and became the backbone of the Luftwaffe’s Jagdwaffe (Fighter Force). The wheels are strong so the plane can be taken off the stand. Propeller is made of metal and mounted on a brass shaft with brass nut. 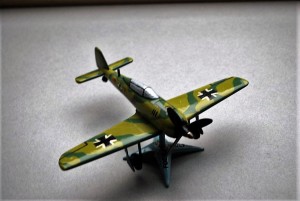 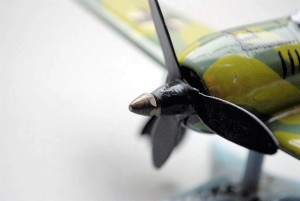 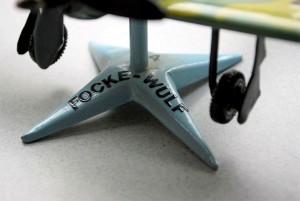 The Focke-Wulf Fw 190 Würger. This plane is handmade in the 60’s in one of the Eastern Bloc country’s. The model plane is found in Hungary. German single-seat, single-engine fighter designed by Kurt Tank in the late 1930s and widely used during World War II, it became the backbone of the Luftwaffe’s Jagdwaffe (Fighter Force). The propeller and wheels can rotate. The wheels are strong so the plane can be taken off the stand. Propeller is made of metal and mounted on a brass shaft with brass nut. 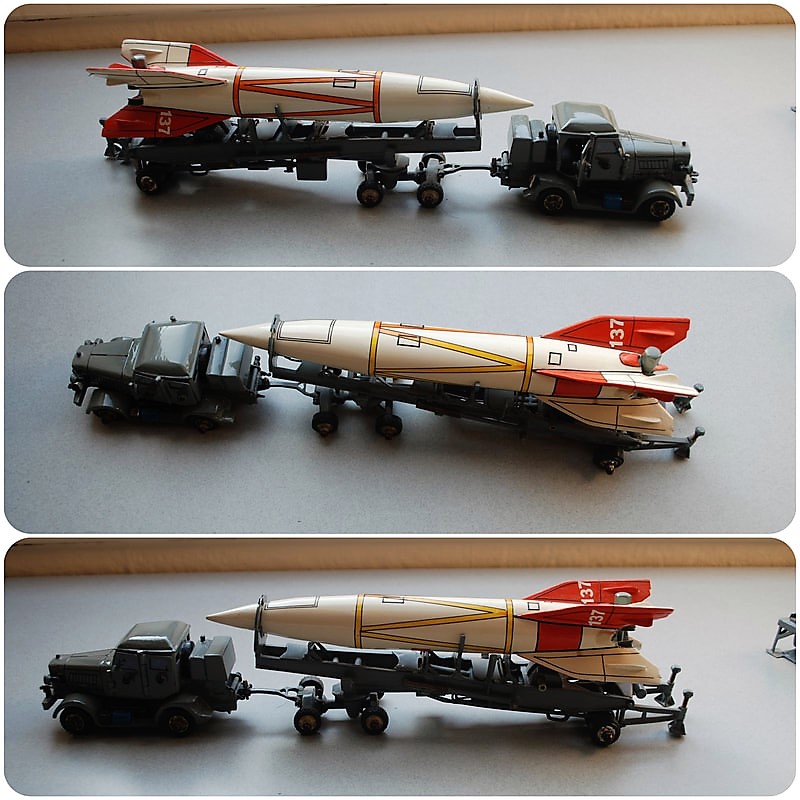 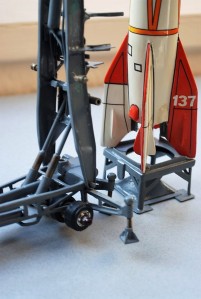 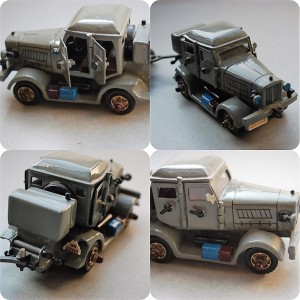 Truck with German V-2 Missile and launch pad 1942-1945.
Vintage, 60s-70s, handmade model made with great passion. Prpbably made in the Soviet Union. The V-2 “Vergeltungswaffe” technical name Aggregat 4 (A4), was the world’s first long-range ballistic missile. The missile, powered by a liquid propellant rocket engine, was developed in Germany during World War II as a “revenge weapon” designated to attack Allied cities in retaliation for the Allied bombing of German cities. The V-2 rocket also became the first man-made object to fly into space by crossing the Kármán line with its vertical launch on June 20, 1944. First space rocket?
It is amazing what a work and craftsmanship has gone into this model. It is made of zinc sheet brass and metal. Everything can be moved or removed, moving, open, standing, driving, etc.
Trailer can be disconnected. Front axle of the trailer rotates in 2 places. The rear support arms can be folded out and the support legs can be rotated downwards. The 4 truck doors can be opened and have a door handle. The missile tilts up until the missile is above the launch pad. There are 2 sliding systems to represent the hydraulic cylinders. Once upright, the clamps can be released and the rocket is on the launch block. There is a locking pin between the rear rocket wings to ensure that the rocket does not fall off the trailer. 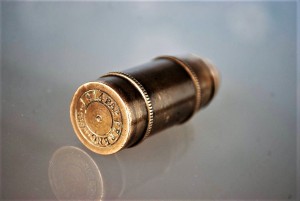 Brass grenade Big Bertha cannon WW1 German Empire. Fat Bertha is the nickname of a German howitzer named after the maker’s wife. The official name was Kurze Marine Kanone L-12 and codenamed M-Gerät.
The shells were handmade and 42 cm.  Probably that’s why “42” is on this granade. At the bottom it says; 1914 PAP FERENC. It’s means PRIEST FERENC. It is made of brass or bronze and has a beautiful patina. Top is shiny due to opening the grenade. Probably used to store something commemorative or not religious. 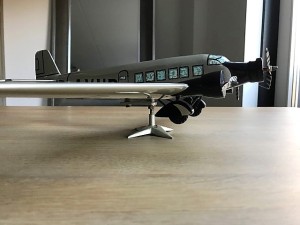 Handmade model of Junkers Ju 52/3M. Made in the 1960’s. The propellers and wheels can rotate. Metal propellers are mounted on a brass shaft with brass nut.
The Ju-52 / 3m is an aircraft built by the German firm Junkers. It is also known by the pet name Tante Ju. The aircraft was commissioned by the Reichswehr, which was then secretly working on the construction of a German air force, developed as a commercial aircraft that could easily be converted into a bomber. The aircraft first flew in March 1932. During the Spanish Civil War, the type was also used for the first time militarily. On August 14, 1936, it flew the first bombing mission. 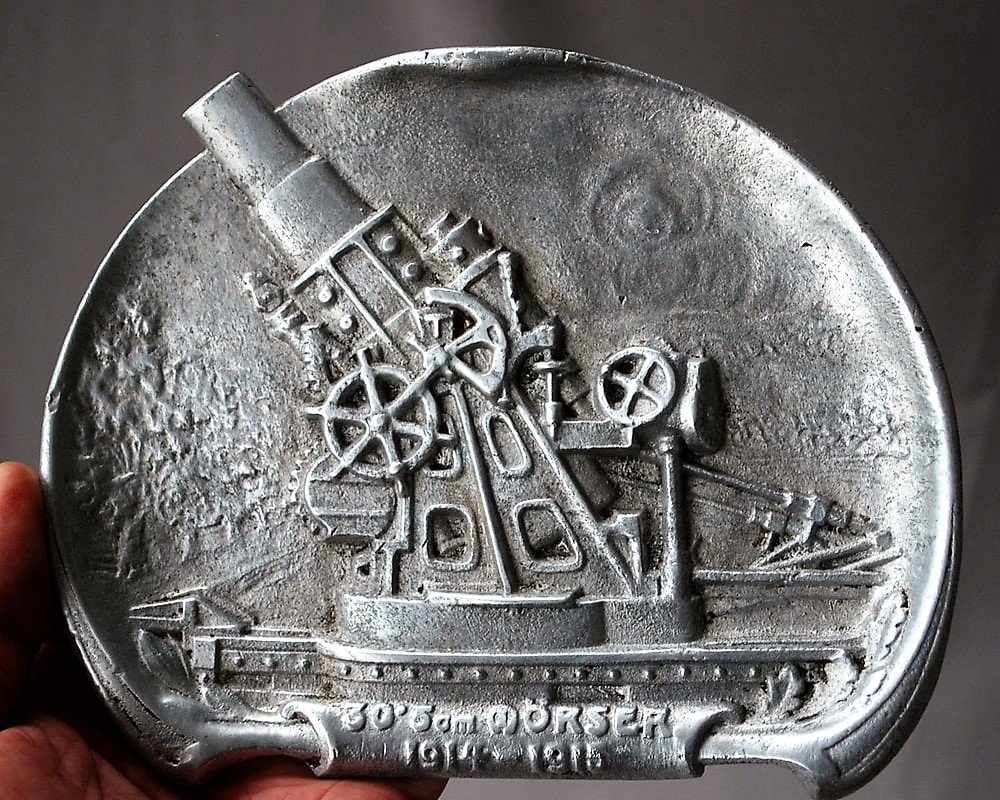 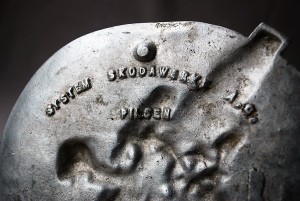 Desktop ornament futuring the heavy Big Bertha howitzer.
Development started in 1906, when a contract was placed in Pilsen by the Austro-Hungarian high command at Skoda-Werke to make a weapon capable of penetrating the concrete fortresses built in Belgium and Italy. Development continued until 1909. The first prototype was finished in 1910 and fired secretly.
Eight Mörsers were loaned to the German army and were first deployed on the Western Front in the early part of World War I. They were used together with the Krupp 42 cm howitzer (“Big Bertha”) to destroy the Belgian fortresses around Liège (Battle of Liège), Namur (Fortified Position of Namur) and Antwerp (Forts Koningshooikt, Kessel and Broechem). While the weapon was used on the Eastern, Italian and Serbian fronts until the end of the war, it was only used on the Western front at the beginning of the war.
In 1915, ten howitzers were used to support the Austro-Hungarian-German invasion of Serbia led by German General August von Mackensen. 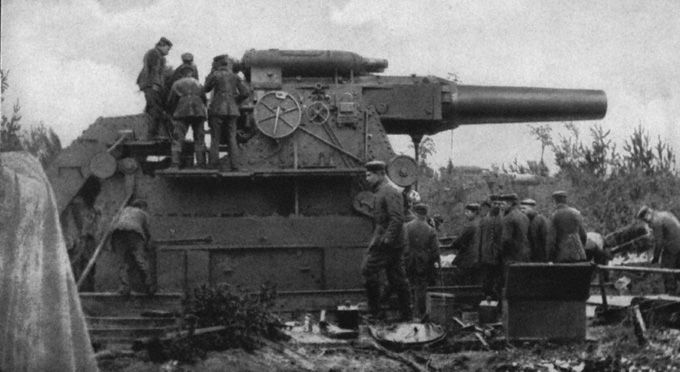