Matchbox label made in the Soviet Union, made in the 1950’s/1960’s. With the image of A. S. Pushkin. Alexander Pushkin was a poet who is considered by many to be the greatest Russian poet and the founder of modern Russian Literature. He lived from 1799 until is death in 1837. He died in a duel. Along with other famous Russian writers he belonged to the golden age of Russian literature in the 19th. century.

Matchbox label made in the Soviet Union, made in the 1950’s/1960’s. The text on the left side of the label is the name of the matchbox factory. On the left the text reads:”May 1st.” also known as Labour Day. The figure on the label is Nikolai Gogol.
Nikolai Vasilyevich Gogol (1809-1852) was a Russian novelist, short story writer and playwright of Ukrainian origin.
Gogol was one of the first to use the techniques of surrealism and the grotesque in his works. According to Viktor Shklovsky, Gogol’s strange style of writing resembles the “ostranenie” technique. His early works, such as Evenings on a Farm Near Dikanka, were influenced by his Ukrainian upbringing, Ukrainian culture and folklore. His later writing satirised political corruption in the Russian Empire.

Matchbox label made in the Soviet Union, 1950’s/1960’s, with the image of a statue of Aleksey Nikolayevich Tolstoy (1883-1945). Nicknamed the Comrade Count, he was a Russian writer who wrote in many genres but specialized in science fiction and historical novels.
During World War II he served on the Extraordinary State Commission of 1942-1947 which “ascertained without reasonable doubt” the mass extermination of people in gas vans by the German occupiers. During the Nuremberg Trials of Nazi war criminals, Soviet prosecutors recognized his work in the investigation of atrocities committed in the Stavropol region.

Price: 0.50 euro
For sale at http://www.propagandaworld.org

Matchbox label from 1968. On the label there is a sculpture wich was made by Matvey Manizer.
As a student Matvey Manizer (1891-1966) was a prominent Russian sculptor. Manizer created a number of works that became classics of socialist realism attended the State Artistic and Industrial Academy there, and the art school of the Peredvizhniki from 1911 through 1916. From 1926 he was a member of the Association of Artists of Revolutionary Russia. In 1941 he moved to Moscow.
Working in an academic and realistic style, Manizer produced a great number of monuments situated throughout the Soviet Union, including some twelve portrayals of Lenin. Manizer was awarded the People’s Artist of the USSR (1958), Member of USSR Academy of Arts (1947), vice president of USSR Academy of Arts (1947-1966), chairman of the Saint Petersburg Union of Artists from 1937 to 1941, and winner of the Stalin Prize three times.

Sculptures made by Matvey Manizer:

Matchbox label from the Soviet Union made late 50’s, early 60’s.
Shown is the “Worker and Kolkhoz Woman”.
The monument is  24.5 metres (78 feet) high, made from stainless steel by Vera Mukhina for the 1937 World’s Fair in Paris, and subsequently moved to Moscow. The sculpture is an example of socialist realism in an Art Deco aesthetic. The worker holds aloft a hammer and the kolkhoz woman a sickle to form the hammer and sickle symbol.

The statue in Moscow 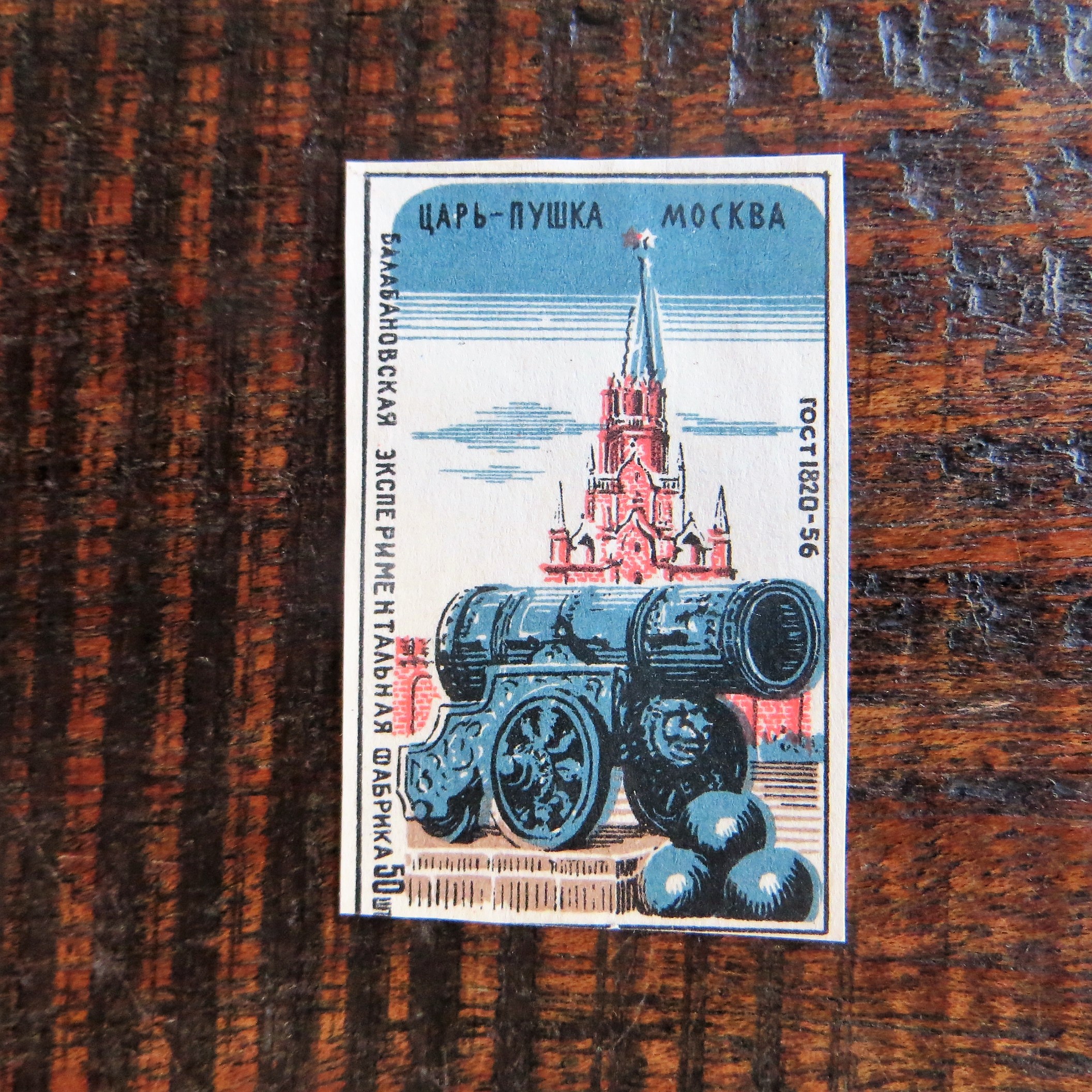 Matchbox label from Soviet Russia featuring the Tsar Cannon. From late 50’s, early 60’s.
The Tsar Cannon is a large early modern period artillery piece (known as a bombarda in Russian) on display on the grounds of the Moscow Kremlin. It is a monument of Russian artillery casting art, cast in bronze in 1586 in Moscow, by the Russian master bronze caster Andrey Chokhov. Mostly of symbolic impact, it was never used in a war. However, the cannon bears traces of at least one firing. It is largest bombard by caliber in the world, and it is a major tourist attraction in the ensemble of the Moscow Kremlin.