Posted by Iljin on 1 October 2022
Posted in: Tableware Hungary. Leave a comment

Vase made in Hungary 1958 for the International Congress of Workers Youth Prague Congress. It was held from 14 to July 20, 1958. Great ascension of 2 young people with the flag behind them. Handpainted. Nice big undamaged vase. How much of these survived?

Posted by Iljin on 18 December 2021
Posted in: Tableware Hungary. Leave a comment

Set of 2 vases from Hungary with military coat of arms, honor branches, hammer and sickle and an image of Lenin Cool item that can be used daily. 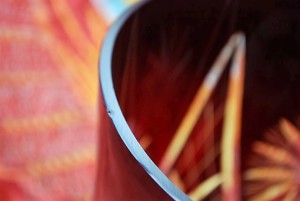 Vase from the Hungarian people’s army under the control of the Soviet Union. On the vase is their logo.
Vase consists of a clear glass with a red glass layer over it. After grinding, the blank parts reappear, which gives it a sparkling effect. Emblem is also grinded but made matt, very beautiful. On the edge there is a tiny little chip (see photo). Who doesn”t want to give his wife a vase like this?
A Workers Guardian was a worker who was trained much like the miliairy in order for the civil defense of Hungary. The militairy budget of Hungary was drastically reduced in order to give the people a better living standard.

Millions of working class people (labours) trained with rifles, mortars, machine guns and artillery to support the regular army in case of war. All this was originated by Janos Kadar who was the communist leader of Hungary who ruled over Hungary from 1956 untill his retirement in 1988. He ruled for 32 years and died in 1989.