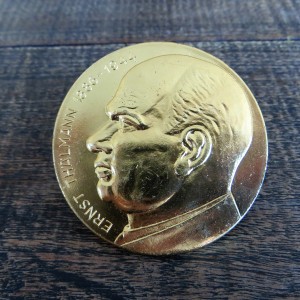 Medal from the DDR made in 1987. The text on the box reads:”Being a member of the SED (communist ruling party DDR) is a honor and obligation”. Pictured on the medal is Ernst Thalmann.
Ernst Thalmann (1886-1944) was a German communist politician. He was leader of the Communist Party of Germany (KPD) from 1925 to 1933. Thalmann was shot in Buchenwald on Adolf Hitler’s personal orders in 1944.

Very rare DDR carpet with Ernst Thalmann on it. The carpet is in perfect condition. Totally original. Very well made.
Ernst Thalmann (1886-1944) was a German communist politician. He was leader of the Communist Party of Germany (KPD) from 1925 to 1933. A committed Stalinist, Thalmann played a major role in the political instability of the Weimar Republic in its final years, when the KPD explicitly sought the overthrow of the liberal democracy of the republic. Under his leadership the KPD became intimately associated with the government of the Soviet Union and the policies of Joseph Stalin, and from 1928 the party was largely controlled and funded by Stalin’s government.
The KPD under Thalmann’s leadership regarded the Social Democratic Party (SPD) as Social fascists. Thalmann viewed the Nazi Party as a lesser evil than the social democrats, and in 1931 his party cooperated with the Nazis in an attempt to bring down the social democrat state government. Thalmann believed that a Nazi dictatorship would fail due to flawed economic policies and lead to a revolutionary situation in which the communist party gained power.
Thalmann was also leader of the paramilitary Roter Frontkampferbund, which was banned as extremist by the governing social democrats in 1929, and in 1932 he established Antifaschistische Aktion or Antifa, which concentrated its attacks on the social democrats. He was arrested by the Gestapo in 1933 and held in solitary confinement for eleven years; Stalin did not seek his release when he entered into the Molotov–Ribbentrop Pact with Germany, and Thalmann’s party rival Walter Ulbricht ignored requests to plead on his behalf. Many of Thalmann’s closest associates who had emigrated to the Soviet Union were executed during the Great Purge of the 1930s. Thalmann was shot in Buchenwald on Adolf Hitler’s personal orders in 1944.
In the First World War he was posted to the artillery on the western front, where he stayed till the end of the war, during the course of which he was wounded twice. He said that he fought in the following battles: Battle of Champagne (1915–1916), Battle of the Somme (1916), Second battle of the Aisne, Battle of Soissons, Battle of Cambrai (1917) and Battle of Arras (1917).

Ernst Thalmann at a rally 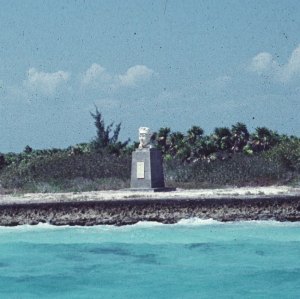 In 1972 Fidel Castro gave one of  Cuba’s 4000 island to the DDR naming it Ernst Thalmann Island. 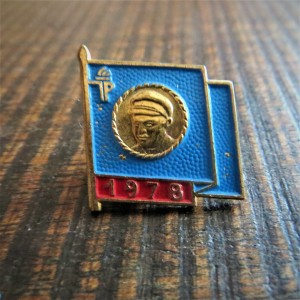 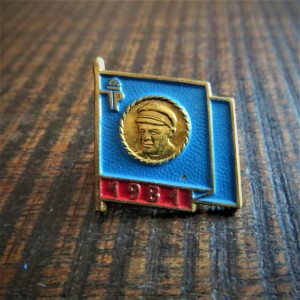 This pin has got a blue flag. Some have a year on it. Pins before 1975 are purple.
Pin DDR from the JP organisation (Young Pioneers). The person on the pin is Ernst Thalmann, a communist leader before WWII. There are blue and purple versions of this pin, without and with years.
The Ernst Thalmann Pioneer Organisation, consisting of the Young Pioneers and the Thälmann Pioneers, was a youth organisation of schoolchildren aged 6 to 14. They were named after Ernst Thälmann, the former leader of the Communist Party of Germany who was executed at the Buchenwald concentration camp.
The group was a subdivision of the Freie Deutsche Jugend (FDJ, Free German Youth), East Germany’s youth movement. It was founded in 1948 and broke apart in 1989 on German reunification. From the 1960s and 1970s, nearly all schoolchildren between ages 6 and 14 were organised into Young Pioneer or Thälmann Pioneer groups.
The pioneer group was loosely based on Scouting, but organised in such a way as to teach schoolchildren aged 6 – 14 socialist ideology and prepare them for the Freie Deutsche Jugend, the FDJ. Its organisation was similar to Scouting and other such organisations. Afternoons spent at the pioneer group mainly consisted of a mixture of adventure, myth-like socialist teaching and the upkeep of revolutionary traditions.