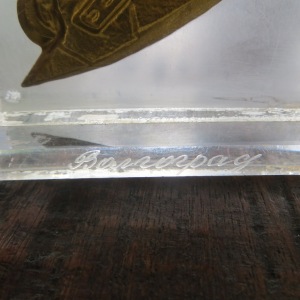 Information:
Size: Size: 12×10 cm. / 4.7 x 3.9 inch.
Desktop Memorial piece to commemorate russia’s victory against german troops in the battle of Stalingrad.
The battle of Stalingrad was a turning point in the war between nazi Germay and Russia. After this battle Russia pushed back the German troops until they reached Berlin. Very brutal war with millions of deaths.
Stalingrad is now called Volgograd. The militairy figure is part of a huge memorial site made by Yevgeny Vuchetich in Volgograd. The lady in the background holding the sword is just as high as the statue of liberty in New York City. 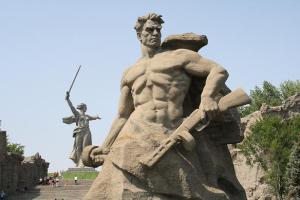 Memorial for the battle of Stalingrad.