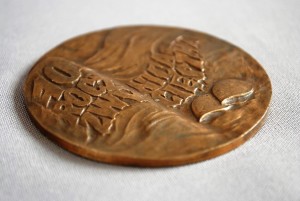 Polish commemoration WWII. Made in 1985. Beautiful symbolic 40 years memorial plaque of the 2nd world war with beautiful patina. The text on the medal reads:”40 Years Of Liberation”. The medal is signed with a “M”. 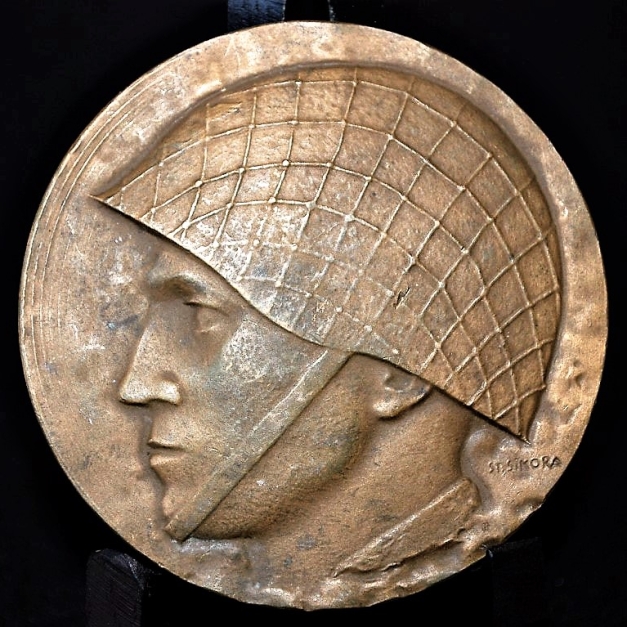 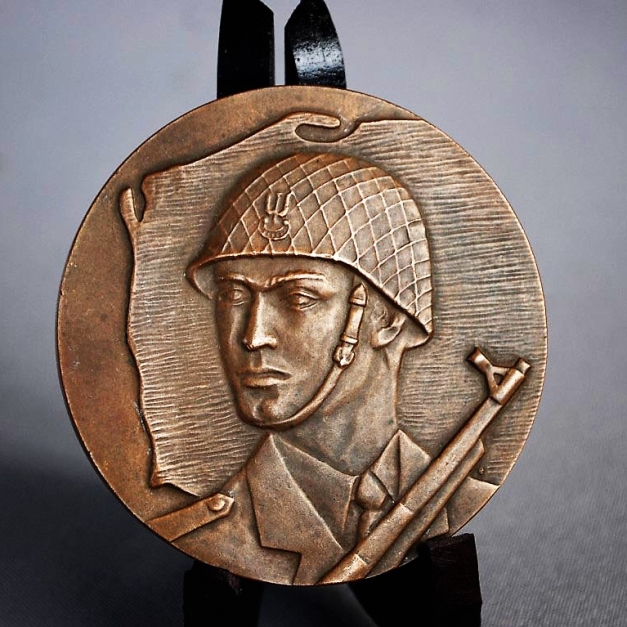 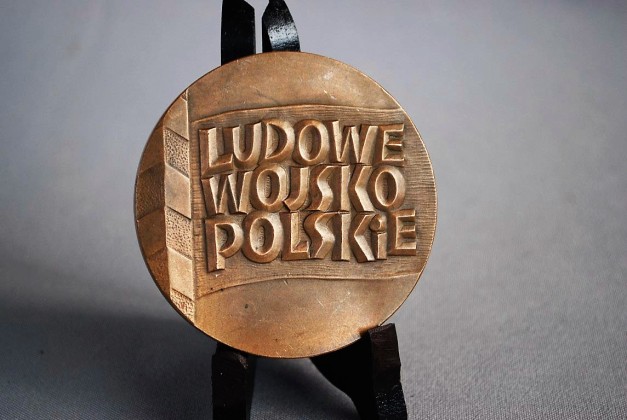 Posted by Iljin on 5 July 2020
Posted in: Medals Poland All. Tagged: Medal, Poland. Leave a comment 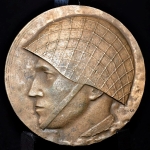 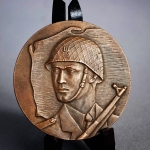 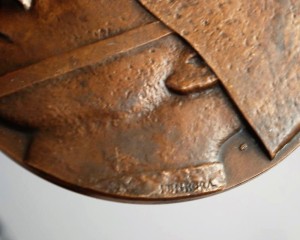 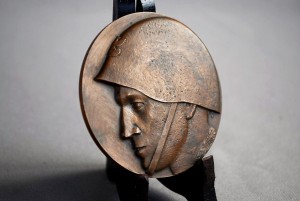 Plaque head Polish soldier. Cold War item. On the back reads “Polish People’s Army” with coat of arms. Signed St. Sikora and stamped, just below the helmet in the neck.

Pin about the Boys Scout organization in Poland. The pin depicts a fleur de lis in nice raised detail in the center of a Maltese cross with a wreath of oak and laurel leaves surrounding it, joined together at the bottom with a bow and reads: “CZU WAJ” through the center.
The term Czu Waj is the Polish Scout Motto and translates to “Be Alert”, during Communist rule in Poland the precepts of World Scouting were not accepted by the government.

This pin is about the city of Gliwice with 180.000 people living in the city (2018). It is one of the major collega towns in Poland. Gliwice is an important industrial center of Poland. Following an economic transformation in the 1990s, Gliwice switched from steelworks and coal mining to automotive and machine industry.
Founded in the 13th century, Gliwice is one of the oldest settlements. Gliwice’s medieval old town was mostly destroyed by the Red Army in World War II, but it has since been rebuilt and has undergone a major restoration in recent years.
An attack on a radio station on 31 August 1939, staged by the German secret police, served as a pretext, devised by Reinhard Heydrich under orders from Hitler, for Germany to invade Poland, which marked the start of the Second World War. From July 1944 to January 1945, Gliwice was the location for one of the many sub-camps of the Auschwitz concentration camp.

Location of Gliwice in Poland 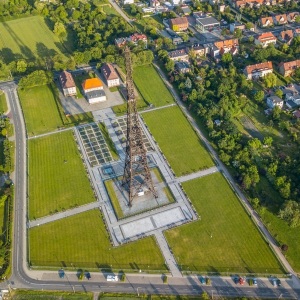 This pin is from Poland from 1984 and it says:”Scouting Marzanna”
Marzanna is a Slavic goddess associated with winter’s death and rebirth and dreams. In Slavic rites the death of the Goddess Marzanna at the end winter, becomes the rebirth of Spring.
The tradition of burning or drowning an effigy of Marzanna to celebrate the end of winter is a folk custom that survives in the Czech Republic, Poland, Lithuania, and Slovakia. The rite involves preparing an effigy in female clothing, and either setting it on fire or drowning in a river (or both).
This is often performed during a field trip by children in kindergarten and primary schools. The effigy, often made by the children themselves, can range in size from a puppet to a life-size dummy. This ritual represents the end of the dark days of winter, the victory over death, and the welcoming of the spring rebirth.

Marzanna taken to her destiny.

Marzanna being set on fire.

Marzanna being thrown of a bridge. 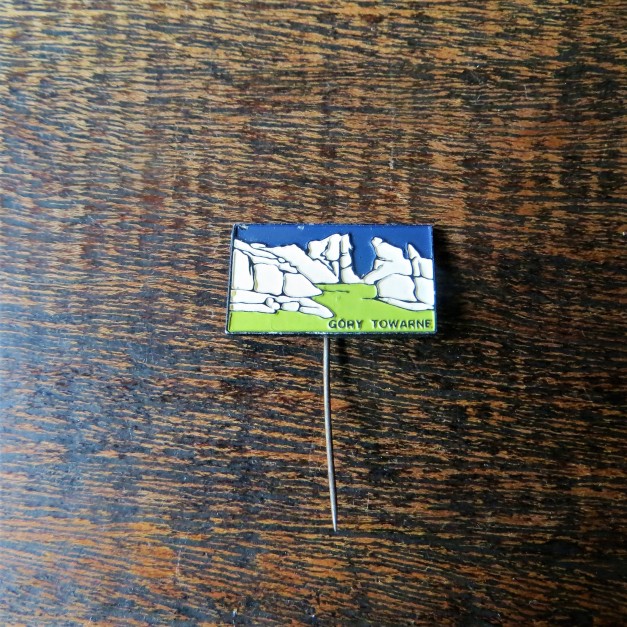 This pin is about the rock formation Gory Towarne in Poland. The rock formation was formed millions of years ago with a system of caves. The system of these caves is easy to explore, and therefore popular with tourists. Prehistoric bones of animals were found in the caves, as well as traces of the early humans. They also served as a hiding place during the German occupation.

The rocks of Gory Towarne. 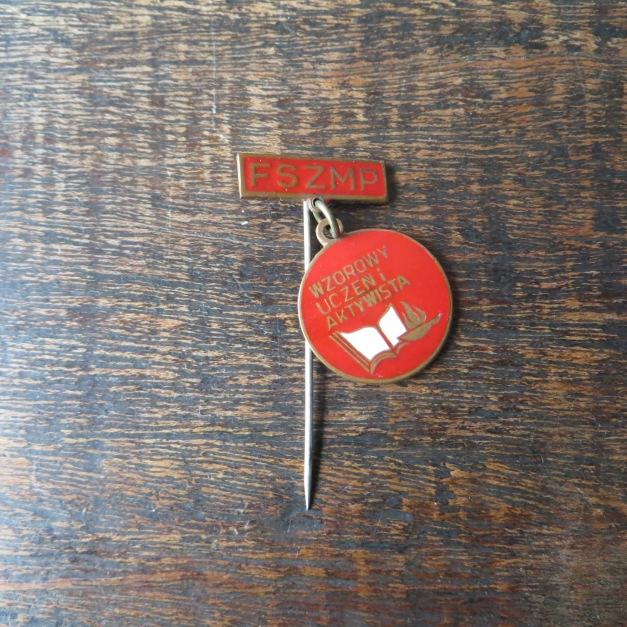 This Polish pin us about the city of Torun. Torun has over 202.000 inhabitants and is the  16th. lagerst city of Poland and one of the oldest city’s of Poland. With the first settlement dated back to the 8th century and believed to be one of the most beautiful cities in Europe and listed on the UNESCO list of World Heritage Sites since 1997. 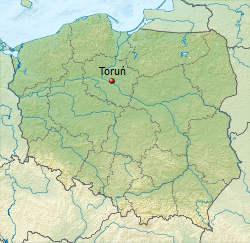 Location of Torun in Poland.

Well, not really a pin but a keychain. It shows the weapon of Olkusz on a piece of wood.
Olkusz is located south of Poland and contains 36.000 inhabitants. Olkusz is called ‘Silver Town” because of the large amount of silver that was found and mined here.
3rd. of July 1940 is known as ”Bloody Wednesday Of Olkusz”.  A German police unit gathered all Jewish men over 14 and they were then subjected to hours of bullying sadism, forced to lie face down in the city square and beaten if they moved. Three men died from the beatings. The event was absolutely unexceptional as regards the treatment of Jews in Poland, but on this occasion however photographs, taken by at least one German present, survive.
In total over 3 million Jews died in WWII in Poland. 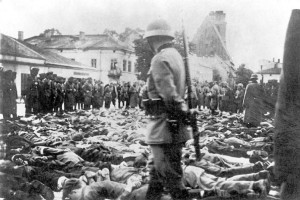 Posted by Iljin on 20 June 2019
Posted in: Pins Poland All. Tagged: Pin, Poland. Leave a comment 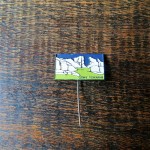 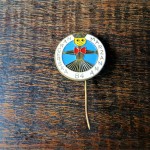 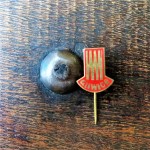 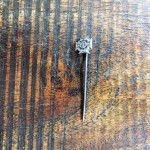 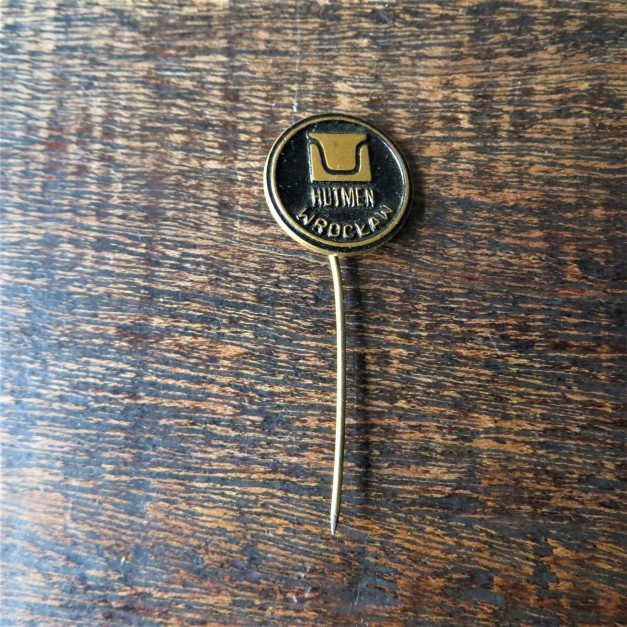